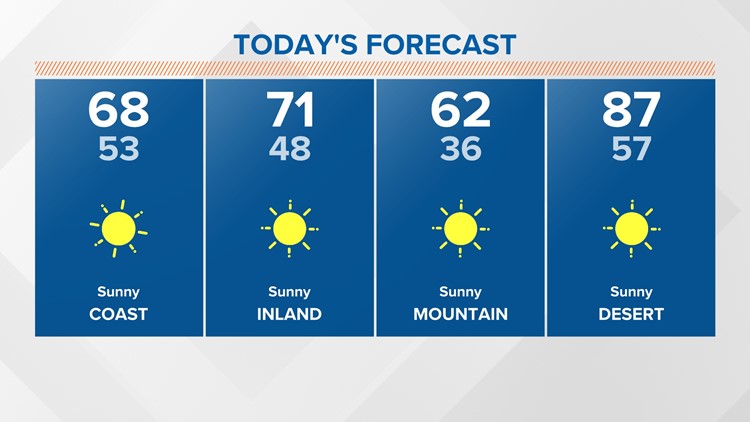 High strain over the southwest will result in hotter than common inland temperatures. Continued onshore circulate will imply much less of an affect for the coast & valleys.

SAN DIEGO — Sunny skies will dominate the forecast throughout the day on Thursday earlier than clouds drift in in a single day into early Friday. However, excessive temperatures might be mild and cozy on Thursday, primarily in the higher 60s and low 70s with a lightweight breeze at instances.

High strain will build over the southwest by Friday. This may have temperatures climbing primarily for the mountains and the desert. Due to the cool marine air, temperatures might be barely hotter. But, they may proceed to be under seasonal for the coast and valleys.

HEADING OUT TO PETCO PARK FOR THE PADRES HOME OPENER?

The surf will subside to 2 to 4 ft with a average danger of rip currents. This may even be the case by Friday.

By Saturday, the marine layer will deepen as a weak system passes to the north of us. No rain is anticipated. Just a minor deep in levels for the start of the weekend. Additionally, west winds will choose up with the strongest breeze favoring the mountains and desert. Expect gust as much as 40 mph.

High strain will rebound on Easter Sunday. Expect sunny skies with a bump in our highs. The warmest temperatures might be felt in the mountains and desert with calmer winds. The peak of the warmth might be on Monday.

By subsequent week, one other low strain system will shut in on the West Coast. Temperatures will slip as onshore circulate picks up. Significant rainfall will not be anticipated. We may see patchy drizzle attributable to the deepening of the marine layer Tuesday by Thursday.

Gratitude may be important part of reducing stress at work